Warning: Use of undefined constant REQUEST_URI - assumed 'REQUEST_URI' (this will throw an Error in a future version of PHP) in /home/cricketr/public_html/wp-content/themes/shopkeeper/functions.php on line 73
 Club Cricket ball | Club Cricket | CRICKET ROOT
Free Shipping Over 120 Cricket Balls!      Contact us:   shop@cricketroot.com   +92302 632 5667
In Stock

Cricket is a war game between bat and ball.The Cricket involves two teams on each side, with 11 players. The captain who wins the toss decides first if his team bats or bowls. If they bat first, their goal is to score a lot of runs and ensure that the other team fails to reach that score.A  Cricket match outcomes are affected by the types of balls used in the game. Even though pitch used in the game also decides which bowler types will be more effective in either fast bowlers or spinners in the game. In this article we explained the different types of Club Cricket ball used in the Test Matches.

2.FORMATS OF THE GAME

The Cricket is played in many formats, but TEST CRICKET and ONE DAY cricket are the most common. In TEST cricket game continues for 5 days, each team battling twice If time allows. ONE DAY is the most common format, the score runs in 300 balls per team. And the other team tries to outscore them in the same ball count.

Test cricket is an international cricket version that started in 1877. On March 15, 1877, the first Test match began and had a timeless format with four balls per over. It finished on 19 March 1877, with Australia winning 45 runs. Tests were played over three , four, or six days in the past and some were “Timeless”–played to a end.Tests are drawn which are not done within the allocated time.

In the 1963 English domestic season, limited overs matches, also known as one day cricket or instant cricket, were introduced in response to demands for a shorter and more exciting style of cricket. One-day, single-inning matches have often taken place before this, but the innovation has been to limit the innings of each side to an agreed number of overs (usually 50).

Twenty 20 Cricket was played in English domestic cricket for the first time in 2003 to popularize first-class cricket and draw more viewers. Since then, it has expanded to several other nations.A “Twenty 20 Game” consists of 20 overs per side, a free-hit after a bowling no-ball, short boundaries, batting-friendly pitches, and other rules designed to attract crowds who would not be willing to sit through the slower-running one-day games or test matches.

In general, a first-class match is described as a high level international or domestic match that takes place on natural (as opposed to artificial) turf over at least 3 hours. Two innings per side are first-class games. If the game is not completed within the allotted time, including Test matches, then it is drawn.Teams where teams only have one innings each are not first-class teams (including internationals for one day).

2.5 Other forms of cricket

Children playing cricket in a park at an upgrade site. People playing cricket on these pitches and make shift grounds are popular in many countries.Cricket laws are also changed at all levels. This is typically in order to make the game more commercially competitive at international or first-class level. Club cricket matches are usually played over one to two days in more or less formal domestic, either two innings per side or one innings per side with limited overs.

The rules are also modified at lower levels simply to make the game accessible with limited resources or to make it more relaxed and enjoyable for the participants. Families and teenagers play backyard cricket in subur ban yards or driveways and India and Pakistan’s teeming cities host endless ‘Gully Cricket’ or ‘Tapeball’ games on their streets. Tennis balls and homemade bats are also used and can act as wickets for a number of items.

Three functions of the players are 1. BATSMEN, 2. BOWLING 3. FIELDING.

Forty-two different laws form the cricket game, Teams may agree to change some of the rules that apply to specific games.Certain rules accompany, and modify, the key laws to deal with specific situations.Specifically, there are a number of changes to the play structure and fielding position rules that apply to one inning games that are limited to a set number of fair deliveries.

Before the match, the two opposing captains embark on a coin flip to determine which side will first bat or bowl. The decision of the captain will be based on whether the bowlers of the team are likely to gain immediate advantage from the pitch and weather conditions (this may vary significantly) or whether the pitch is more likely to deteriorate and make batting more difficult later in the game. Therefore, the coin flip at the start of the game is highly influential in deciding the game’s outcome.

Each inning is split into overs, each consisting of six sequentially legal deliveries which are bowled by the same bowler. The bowler must take up a fielding role after completing

An innings is completed if:

Usually, for three to five days, two-inning matches are played with at least six hours of cricket played per day. One-inning matches are usually played six hours or more over a day. Through day there are formal intervals for lunch and tea and, where possible, shorter breaks for drinks. . There’s a short interval between innings, too.

The game is played only during dry weather. Furthermore, because it is common for club cricket  balls to be bowled at more than 90 miles per hour in professional cricket, the game has to be played at daylight good enough for a batsman to see the ball. Summertime. In the West Indies, India, Pakistan, Sri Lanka and Bangladesh games are played in the winter. For these countries the summer coincides with the hurricane and monsoon season.

6. Approval and control of balls

All balls which have been determined by the umpires to be used in the match shall be in the possession of the umpires before the toss and shall remain under their control throughout the match.

The umpire shall take possession of the ball in use at the fall of each wicket, at the start of any interval and at any interruption of play.

On the fall of each wicket, at the start of any interval and at any interruption of play, the umpire shall take possession of the ball in use.

Unless there is agreement to the contrary before the match, either captain can demand a new  Club cricket ball at the beginning of each inning.

6.4 New ball in match of more than one day’s duration

For a match that lasts longer than one day, the fielding side captain may demand a new ball when the number of overs, except any part overs, bowled with the old one is equal to or greater than 80 overs. The umpire shall notify the other umpire and inform the batsmen and scorers whenever a new ball comes into play.

If the  Club Cricket ball can not be found or recovered during play, or the umpires agree that it has become unfit for play by normal use, the umpires shall replace it with a ball wearing comparable to that received by the previous ball before it was needed to replace it.When the ball is replaced the umpire must alert the batsmen and the captain of the fielding. 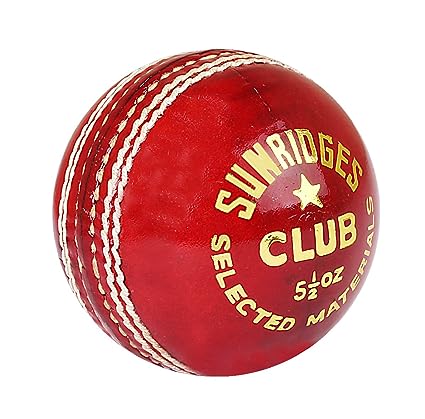 Cricket rules provide for the  Club cricket ball to be handled in a certain way. When it gets hurt, the game must be replaced before it can continue.

At the start of each inning, a new  Club Cricket ball will be used regardless of whether the batting team is following on or not.The cricket ball should also be replaced in matches of more than a day’s duration after a set number of overs. The exact number varies from country to country but must be greater than 75 overs. The fielding team can choose to take a new ball after 80 overs in Test, and most first-class cricket.

If the ball is lost or damaged beyond usability — for example, after a player hits

it off the ground — it should be replaced in similar condition with a cricket ball.

Red is the default Cricket balls color. However, since the advent of limited-over matches under floodlights, white has become the norm for one-day matches and Twenty20 matches regardless of whether they are played during the day or at night .Other colors have been experimented with, including pink and orange, but red and white remain standard. Other colours, including pink and orange, have been experimented with, but red and white remain standard.

What are you looking for?